Carroll County has preserved a number of its historic bridges—many in their original locations and some in relocation projects. The Carroll County Historic Bridge Coalition has been instrumental in persuading county officials to rehabilitate and preserve notable bridges whenever possible instead of replacing them with modern structures. Since most of Carroll County is rural farm community and some of the roads are not heavily traveled, preservation of many bridges has been possible.
Carroll County Historic Bridges
Stone Arches
To the north of Lockport in Adams Township is Burnett's Creek Arch. It is located on Towpath Road which runs near the Wabash River and the bed of the Wabash and Erie Canal. It is a wonderful example of 1840s engineering. This limestone arch was built without mortar in the years 1838-1840 to serve as an aqueduct that carried the Wabash and Erie Canal over Burnett's Creek. Some of the limestone blocks used to build the arch are twelve feet long and two feet thick. Three layers of black walnut beams across the creek bottom still form the arch's foundation. The arch is 20 feet wide at the bottom, 85.5 feet from end to end, and 10 feet high. Listed on the National Register of Historic Places, it now carries Towpath Road and is the oldest working bridge in Indiana. It served for many years as the symbol of the Carroll County Historical Society. 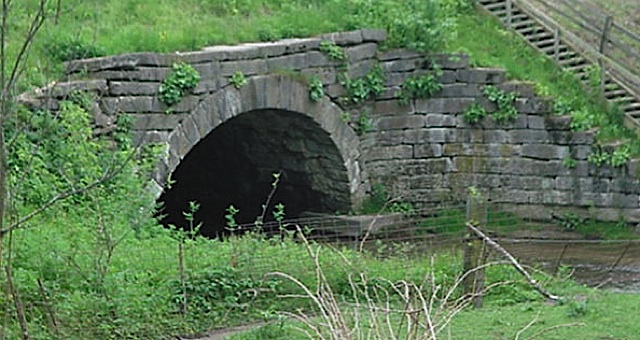 The Washington Street Stone Arch built in 1901 over the Wabash & Erie Canal in Delphi is a much later but still impressive arch which is still in use. The arch is located betweeen Canal Park and the Annex, and the canal boat, The Delphi, travels under the arch during its trips between the Canal Interpretive Center and its home in the new replica Speece Warehouse storage facility. 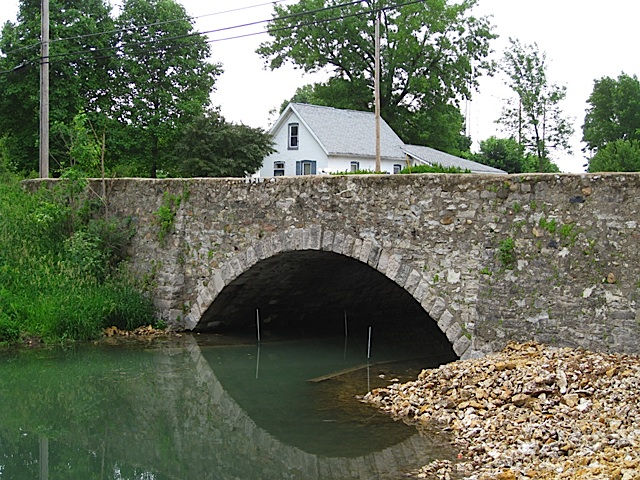 A Stone Arch Bridge also spans the Canal on Bicycle Bridge Road in west Delphi. It was built in 1901 by local mason John C. O’Connor. This arch is near the Blue Bridge which is behind Pizza Hut and serves as a pedestrian bridge over the Canal side-cut in the Delphi Historic Trails system. 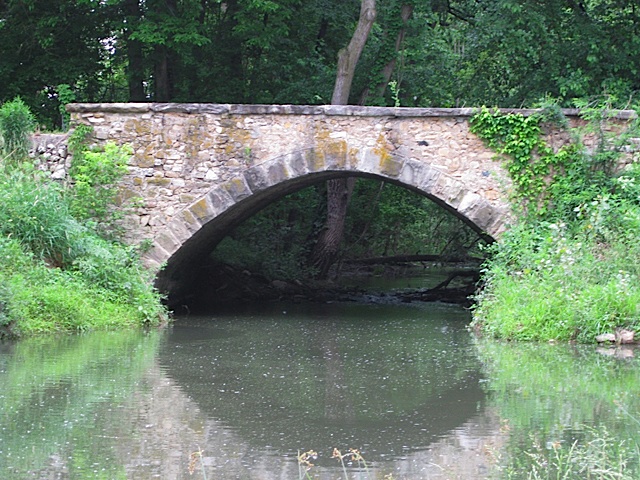 Another Stone Arch Bridge over Little Rock Creek on CR 1025 North near Lockport was built in 1903, also by O’Connor.
Wooden Covered Bridges
Carroll County still has two covered bridges which have been rehabilitated in recent years as well. The Adams Mill Covered Bridge near Cutler, Indiana, is in a beautiful area on Wildcat Creek in the southeastern part of the county. The bridge is listed on the National Register of Historic Places. Adams Mill Bridge is an 1872 Howe truss style and had white siding and 18-inch cedar shake roof. A bow arch was added later. Covered bridges gave protection for floors and helped nervous horses focus on the far bank. They were built wide enough for a load of hay to pass through but not for two-way traffic. After being closed and vandalized over about 30 years, the bridge was restored and reopened for 3-ton traffic in October 1999. Window openings were added on both sides so that the view of Wildcat Creek could be enjoyed. Friends of Adams Mill raised funds and lobbied for the rehabilitation. History and restoration of the bridge are described at Wikipedia and you can check out additional photos here! 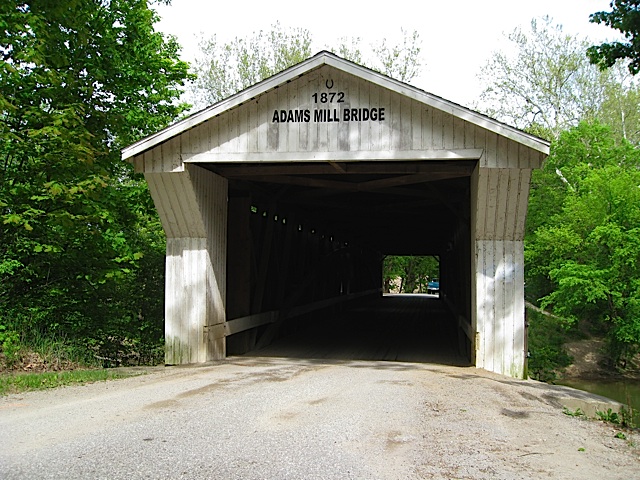 The Lancaster Covered Bridge, over Wildcat Creek near Owasco, Indiana, is also located in a very scenic area. It features a Howe-truss design and is one of two in Indiana with a unique iron substructure patented by Alpheus Wheelock in 1870. The bridge is listed on the National Register of Historic Places. It was nearly lost in a 2003 flood. More photos of the bridge are found here. 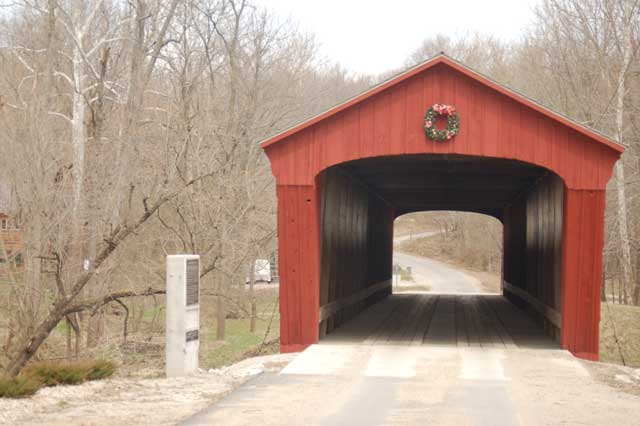 Iron Bridges
Wilson’s Bridge in the Deer Creek Valley Historic District east of Delphi was just rehabilitated to make beautiful and functional improvements to our county roads. Wilson’s Bridge was named after an adjoining property owner who petitioned for its construction in 1897. The Lafayette Bridge Company fabricated the Pratt through-truss structure for $2,499. The bridge retains its original truss members and decoratively latticed guardrails. It is listed on the National Register of Historic Places. Wilson's Bridge was rehabilitated, re-painted, and re-opened in 2008. 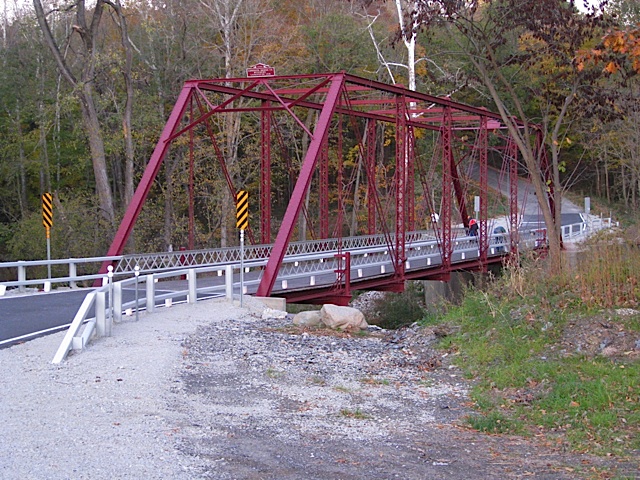 The Xenia Bridge over the Wildcat Creek in the southern part of the county has recently been repaired and re-painted. It is a Parker through-truss bridge on Prince William Road, the major artery between Delphi and Frankfort in the early days of the county. The bridge was originally designed and built by the Indiana State Highway Commission in 1931 for use elsewhere and was relocated to its present site in 1945. 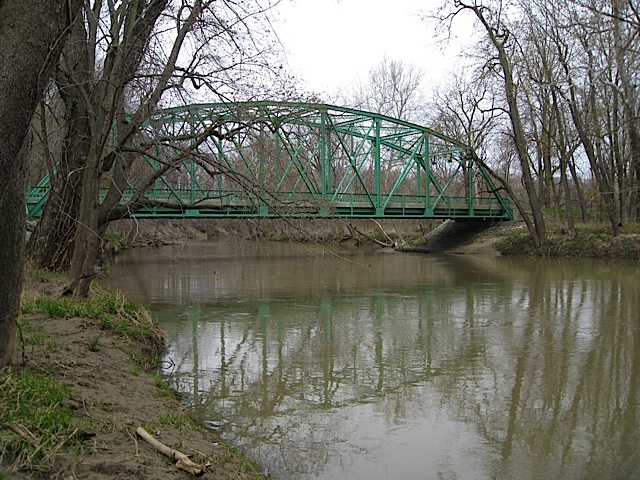 The Wildcat Creek Indiana State Route 75 Bridge is also a Parker through-truss design, constructed in 1947 and re-painted most recently in 2007. It is located north of Cutler on the state highway. 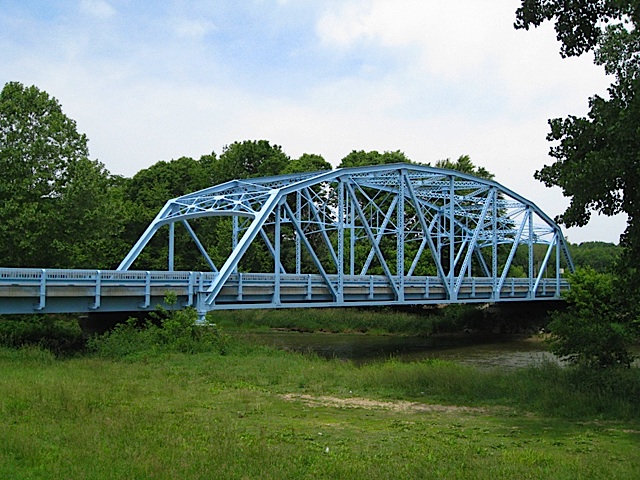 A great example of a large 1908 Warren pony truss was designed by the Indiana State Highway Commission and moved to span Deer Creek in 1968. It is on Meridian Road, just east of SR 75, southeast of Camden.

Concrete Bridges
The historic 1927 Carrollton Bridge over the Wabash River is a six-span concrete arch bridge designed by Daniel Luten. It is located near the now-lost village of Carrollton, which had prospered as a canal town during the days of the Wabash and Erie Canal. The handsome bridge is listed on the National Register of Historic Places. The 615-foot-long structure of filled-spandrel arches and a deck extending beyond the spandrels on wide brackets was restored and re-opened in 2008. The County Commissioners, who decided in 2005 to restore rather than replace the bridge, received a preservation award from Historic Landmarks Foundation of Indiana along with several other awards. 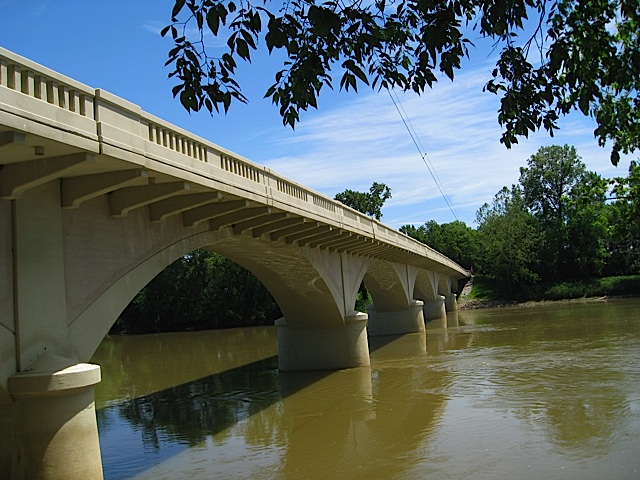 Upriver from this site, also along the Wabash and Erie Canal is Lockport Bridge, another historic concrete span which is adjacent to historic French Post Park . This is Indiana’s longest continuous T-beam bridge. It was designed in 1938 by Fort Wayne’s City Engineer, Chauncey McAnlis. The streamlining of the outer beams and its graceful arches give the bridge a distinctive Art Deco appearance. The beams rest on metal rollers, which allow the superstructure to shift with temperature changes. 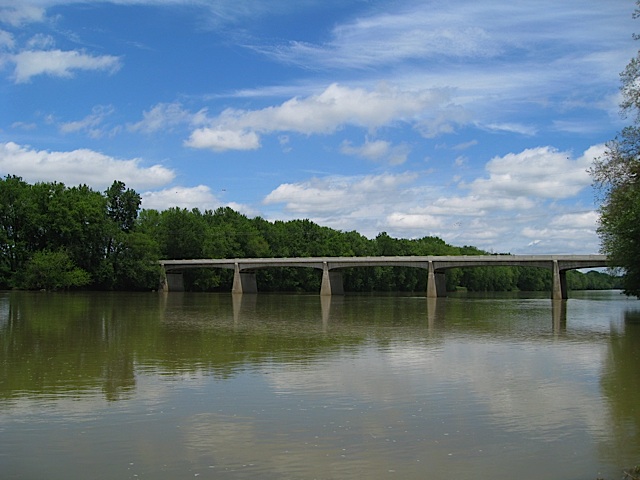 The North Street Viaduct over U. S. Highway 421 in south Delphi is the only example of a rigid frame designed by the Indiana State Highway Commission. It was built in 1936 at a cost of $38,000, replacing a 1908 structure. The contractor was Harold Tharp. 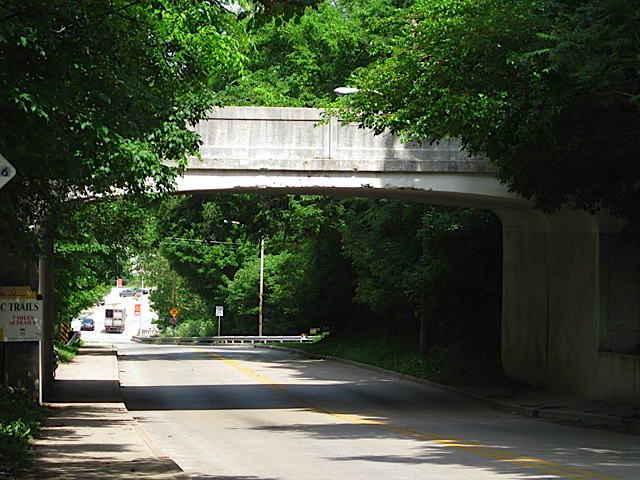 Railroad Bridges
Monon High Bridge is an abandoned steel trestle over Deer Creek on the Monon Railroad near Delphi. High Bridge rests on stone at one end and on large concrete pillars. It is in the scenic Deer Creek Valley at the end of the High Bridge Trail. It was constructed in 1881 and rebuilt in 1891. It is the second-highest bridge (at 63 feet) in Indiana, and the second-longest nearly 854 feet) on the old Monon line. 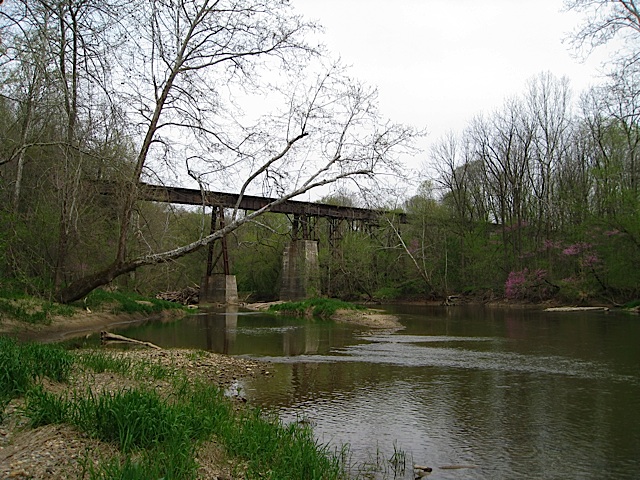 A steel stringer bridge over SR 25 in eastern Delphi is on the abandoned Monon Railroad right-of-way. It serves as a pedestrian and horse and buggy overpass of SR 25 on Delphi Historic Trails on the route from Delphi City Park past the Milroy Monument to High Bridge. 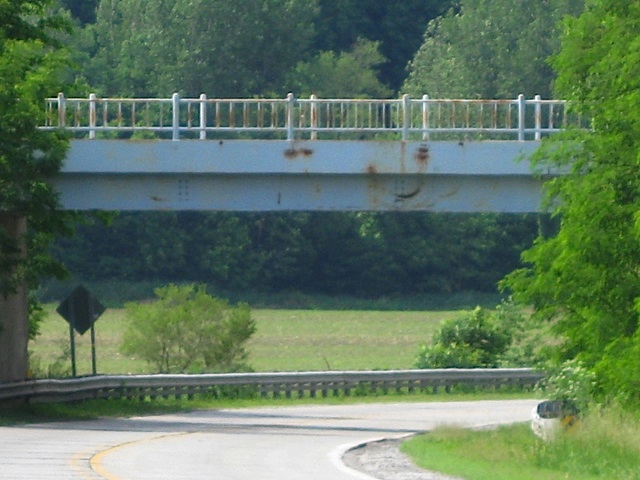 Owasco Monon Trestle is an abandoned steel trestle over Wildcat Creek on the Monon Railroad near Owasco, Indiana, in southern Carroll County. It can be seen from the new concrete bridge on U. S. Highway 421 which crosses the North Fork of Wildcat Creek. It is still standing but has not been used for many years and is in poor condition. 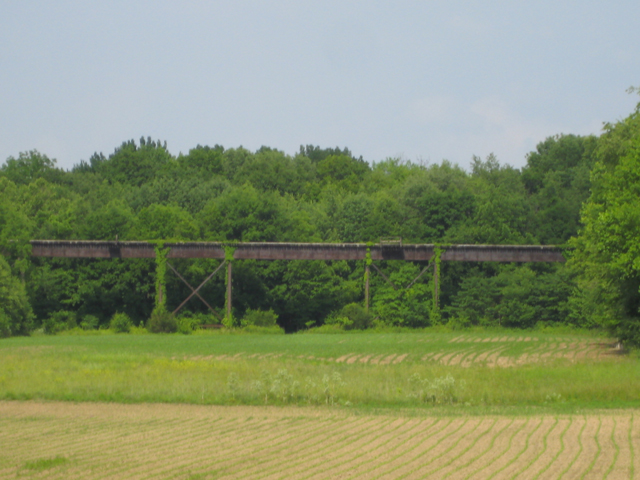 Pedestrian Bridges
Two bridges have been relocated to sites in Delphi on the Delphi Historic Trails. The Red Bridge was relocated from Paint Creek near Camden and placed over the Wabash & Erie Canal on a trail in Canal Park in Delphi. It was constructed in 1874, one year after the county commissioners decided to build iron rather than wooden bridges. Fabricated by the Massillon Bridge Company of Ohio, it is one of the oldest iron bridges in Indiana and a rare surviving example of a metal “bowstring” arch incorporating Howe-truss features. 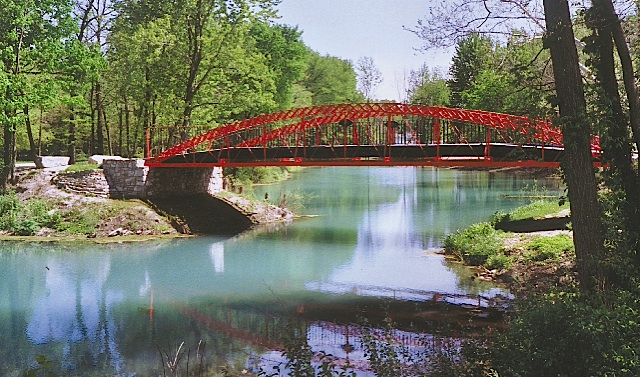 The Blue Bridge (or Gilmore Bridge), a Stearns truss, was relocated to the Trails from Pulaski County where it had spanned the Big Monon Ditch. It is now over the Canal side-cut behind Pizza Hut in Delphi. The Carroll County Wabash & Erie Canal Association was responsible for the relocation and restoration of the bridge to an area of great importance to the Canal and related businesses. The Canal Association received a preservation award for this bridge from Historic Landmarks Foundation of Indiana in 2008. 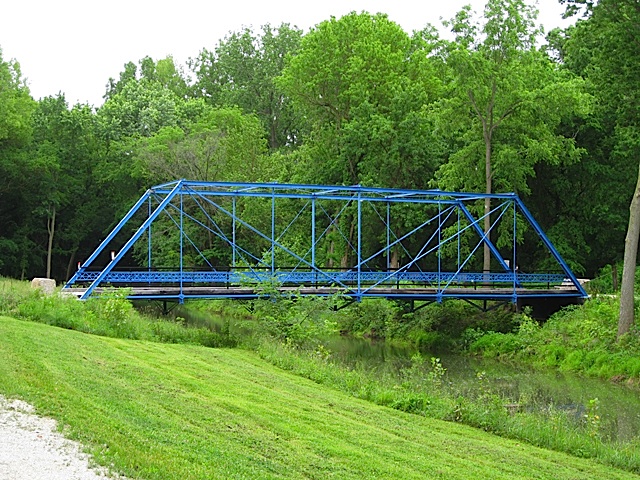 Another bridge which is no longer on a county thoroughfare is a Pratt through-truss structure which was built by James Peirce of Delphi and the Attica Bridge Co. The bridge spans Wildcat Creek and is now located within Angel Hill Golf Course off U. S. Highway 421 at the southern boundary of Carroll County near Rossville.

Tioga Bridge is a long two-span Whipple through-truss structure which crosses the Tippecanoe River between Carroll and White counties at Monticello. No longer safe for vehicular travel, it is limited to pedestrian use.

The Riley Park suspension bridge in Delphi’s Riley Park along the Deer Creek was built most recently in 2004. It was built previously in 1911, 1988, and 1998, and was victim to flooding until its most recent build above the potential flood levels. It provides scenic access to the park from downtown, and was built originally to provide access for students from school to the athletic fields. 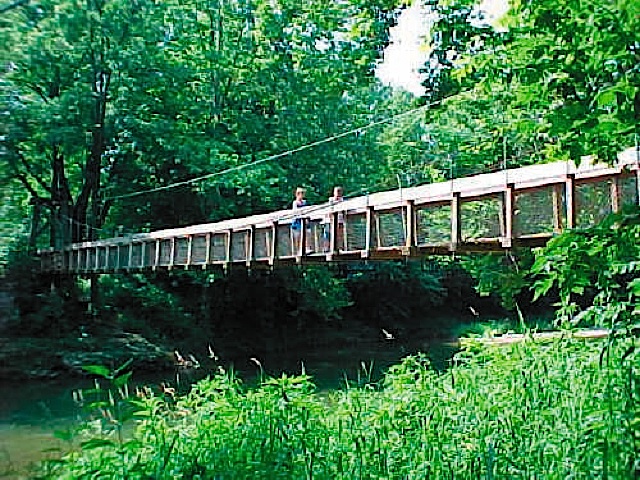 While not historic, another pedestrian suspension bridge is located a Trailhead Park in Delphi. It was built to provide access from the parking area and park to the trails system along the Canal and Wabash River. 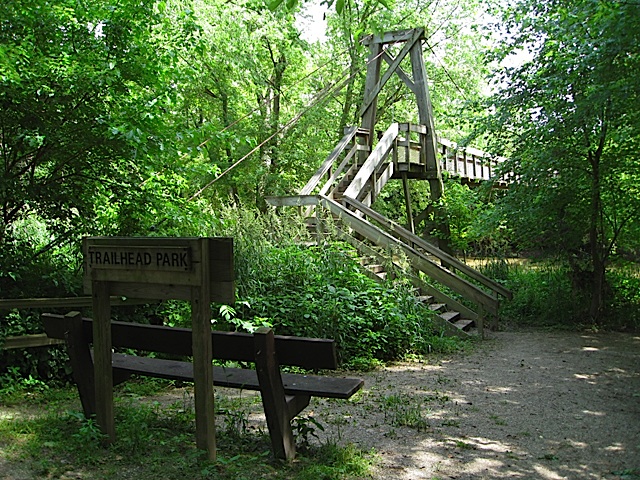