Some of Carroll County’s historic sites are marked with heavy metal markers that were installed as early as 1971. Some of these replaced markers that had been placed in 1936 in a state-wide program. Three of the signs are part of the Indiana Historical Bureau’s program, and the others were placed by the Carroll County Historical Society or other organizations.
Adams Mill
Adams Mill
Adams Mill, powered by the waters of Wildcat Creek, was built in 1845 by John Adams. The mill is now a Museum of Americana 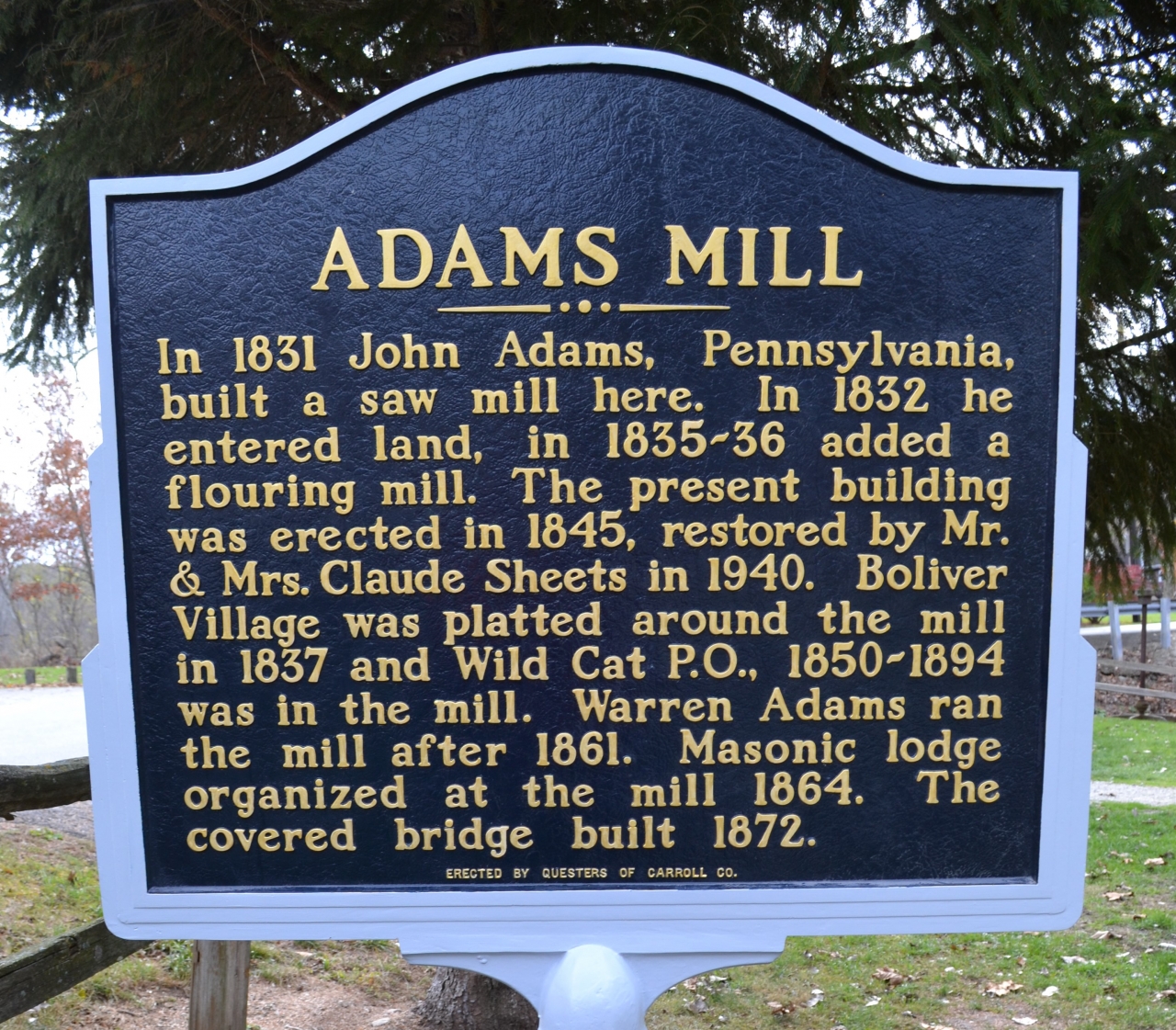 open to the public for tours on weekends and by special arrangement. The mill is a prime example of post and beam construction common to the 19th century agricultural structures in Indiana. No nails were used in the original framework, only wooden pegs. Posts and beams are made of walnut and the joists are of oak. All of the lumber was harvested locally and hand-hewn or cut on site. The mill produced assorted grades of flour for over 100 years during the tenure of nine owners. Finely ground cake flour was a specialty of Adams Mill. Commercial milling ceased in the 1950s. Most original machinery is still operational.
Historical Marker Text
In 1831 John Adams, Pennsylvania, built a saw mill here. In 1832 he entered land. In 1835-36 added a flouring mill. The present building was erected in 1845, restored by Mr. & Mrs. Claude Sheets in 1940. Boliver Village was platted around the mill in 1837 and Wild Cat P.O., 1850-1894 was in the mill. Warren Adams ran the mill after 1861. Masonic lodge organized at the mill 1864. The covered bridge built 1872.
Erected by Questers of Carroll County at Adams Mill near Cutler.
Wild Cat Lodge No. 311 F. & A.M.
Organized June 25, 1864, the Lodge used the third floor of Adams Mill as meeting place until autumn 1867, one of two known 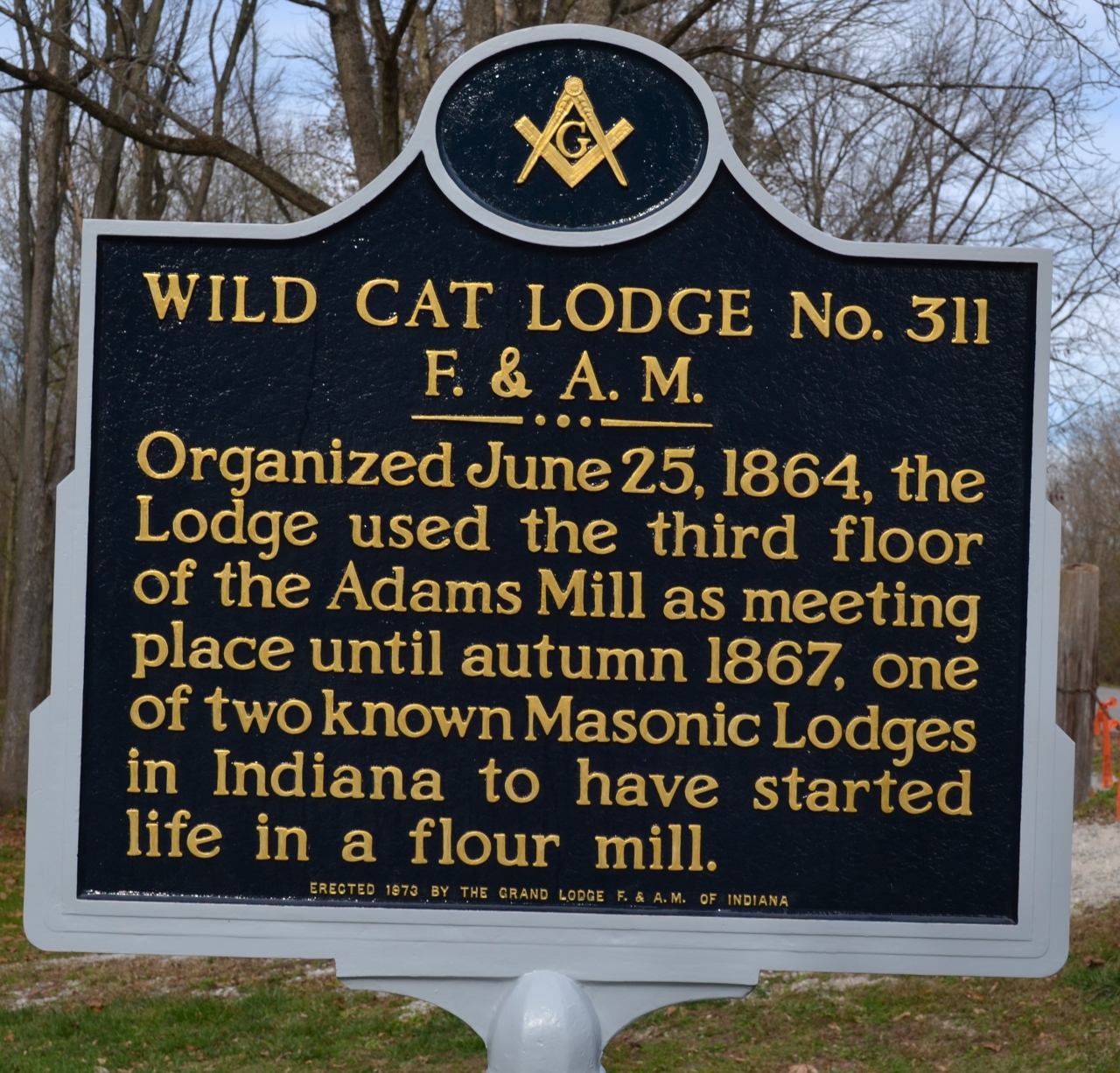 Masonic Lodges in Indiana to have started life in a flour mill.
Erected 1978 by the Grand Lodge F. & A.M. of Indiana at Adams Mill near Cutler.
Burlington
Burlington
Laid out in 1828 by David Stipp. Promoted for seat of a new county to be made partly from the Great Miami Reserve, which began
two miles east. The Lafayette & Burlington Road [not 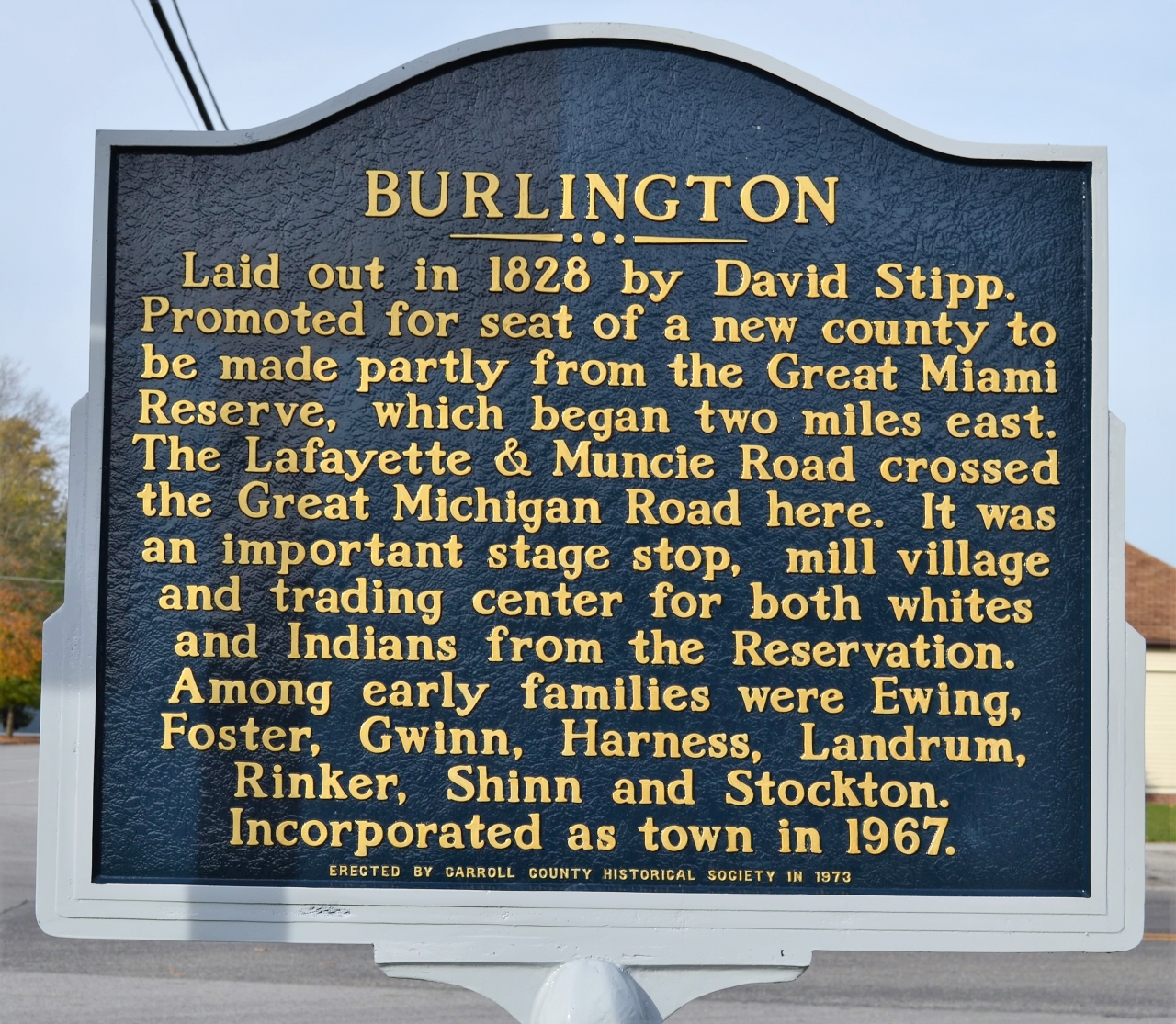 Muncie Road, as the sign reads] crossed the Great Michigan Road here. It was an important stage stop, mill village and trading center for both whites and Indians from the Reservation. Among early families were Ewing, Foster, Gwinn, Harness, Landrum, Rinker, Shinn and Stockton. Incorporated as town in 1967.
The Burlington sign was erected in Burlington at the junction of State Roads 29 and 22 in 1973.
Camden
Camden 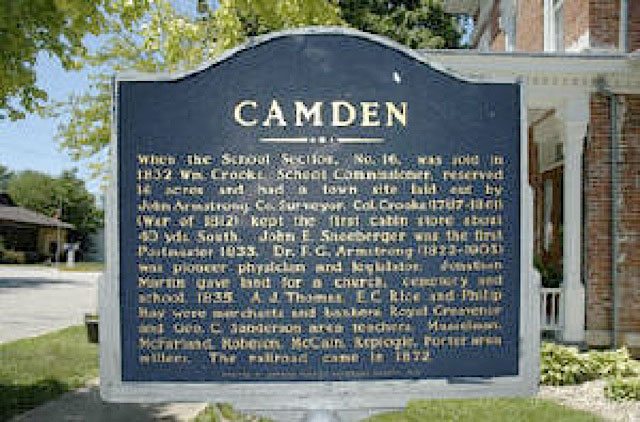 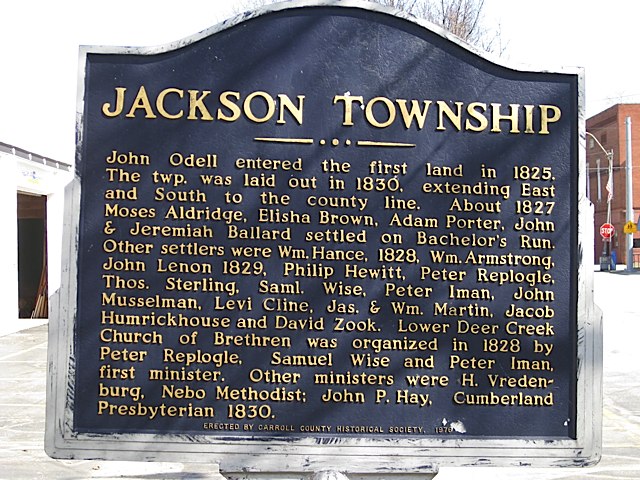 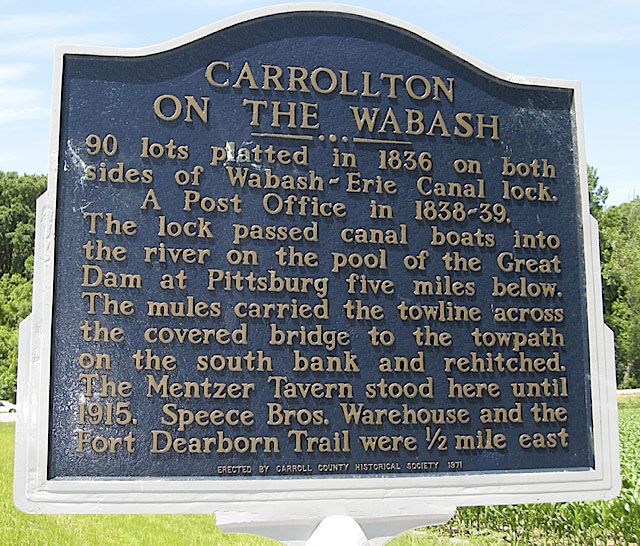 90 lots, platted in 1836 on both sides of Wabash-Erie Canal lock. A Post Office in 1838-39. The lock passed canal boats into the river on the pool of the Great Dam at Pittsburg five miles below. The mules carried the towline across the covered bridge to the towpath on the south bank and rehitched. The Mentzer Tavern stood there until 1915. Speece Bros. Warehouse and the Fort Dearborn Trail were ½ mile east.
The first Historical marker erected by the Carroll County Historical Society was placed at the North end of the Carrollton Bridge in 1971. It was re-set near the bridge after the bridge’s recent renovation.
Cutler
Cutler School 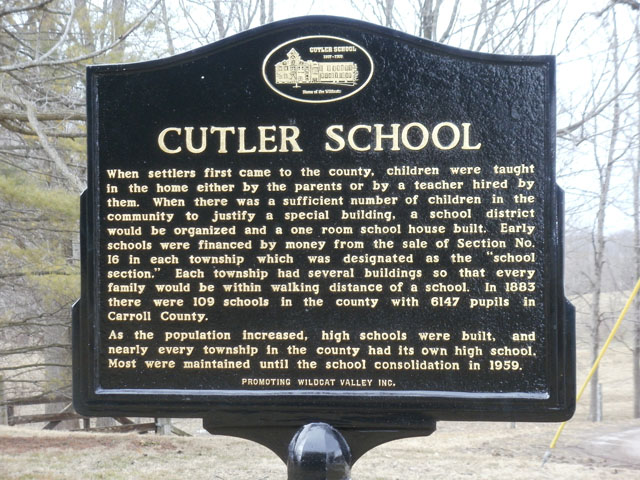 When settlers first came to the county children were taught in the home either by the parents or by a teacher hired by them. When there was a sufficient number of children in the community to justify a special building, a school district would be organized and a one room school house built. Early schools were financed by money from the sale of Section No. 16 in each township which was designated as the “school section.” Each township had several buildings so that every family would be within walking distance of a school. In 1883 there were 109 schools in the county with 6147 pupils in Carroll County. As the population increased, high schools were built, and nearly every township in the county had its own high school. Most were maintained until the school consolidation in 1959.
Erected in 2012 by Promoting Wildcat Valley.
Delphi
Delphi 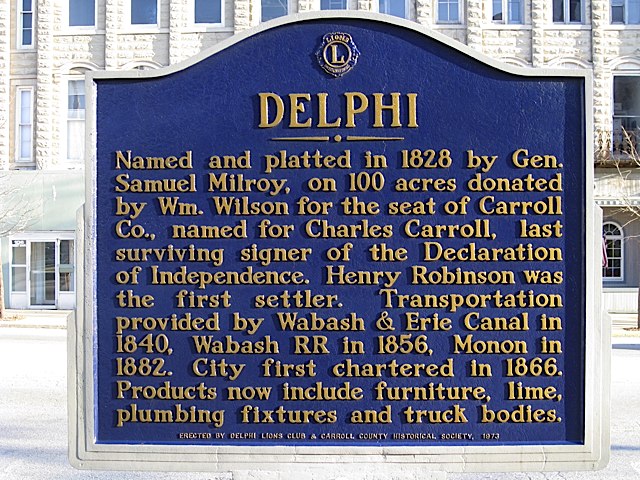 Named and platted in 1828 by Gen. Samuel Milroy, on 100 acres donated by Wm. Wilson for the seat of Carroll Co., named for Charles Carroll, last surviving signer of the Declaration of Independence. Henry Robinson was the first settler. Transportation provided by Wabash & Erie Canal in 1840, Wabash RR in 1856, Monon in 1882. City first chartered in 1866. Products now include furniture, lime, plumbing fixtures and truck bodies.
The Delphi sign was erected on the south side of the Courthouse in 1973 by the Delphi Lions Club and the Carroll County Historical Society.
Wabash and Erie Canal 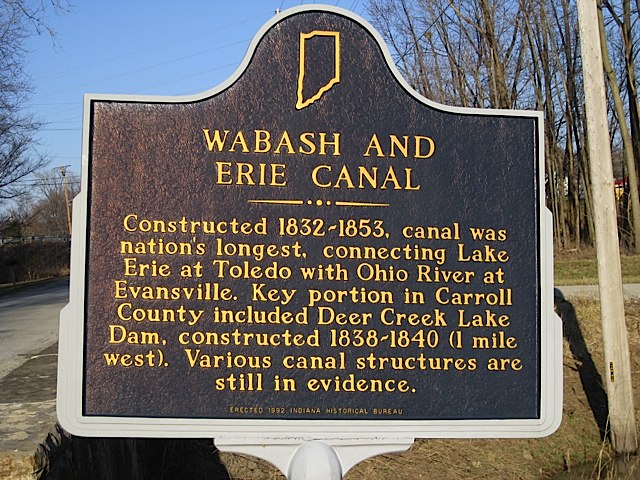 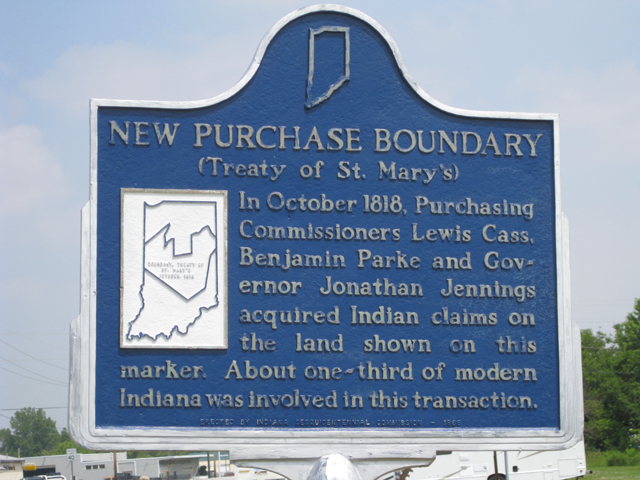 In October 1818, Purchasing Commissioners Lewis Cass, Benjamin Parke, and Governor Jonathan Jennings acquired Indian Claims on the land shown on this marker. About one-third of modern Indiana was involved in this transaction.
Erected by Indiana Sesquicentennial Commission 1966. Located east of the Wabash River bridge on Highway 421/39/18 between Pittsburg and Delphi.
Flora
Flora 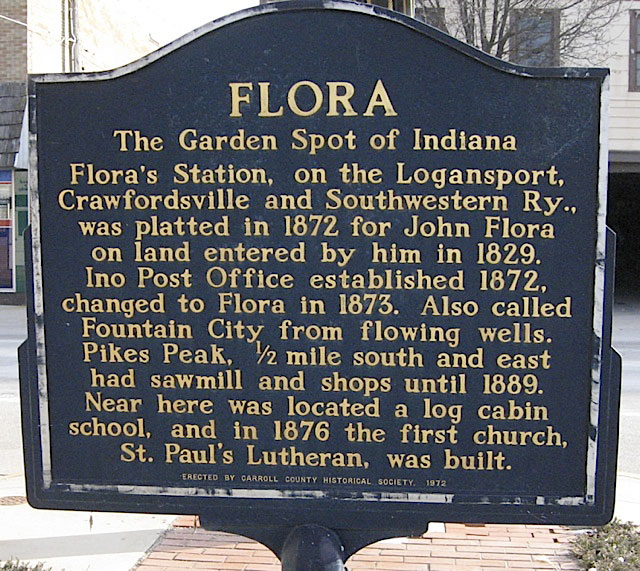 The Garden Spot of Indiana. Flora’s Station, on the Logansport, Crawfordsville and Southwestern Ry., was planned in 1872 for John Flora on land entered by him in 1829. Ino Post Office established 1872, changed to Flora in 1873. Also called Fountain City from flowing wells. Pikes Peak, ½ mile South and East had sawmill and shops until 1889. Near here was located a log cabin school, and in 1876 the first church, St. Paul’s Lutheran, was built.
The Flora sign in the Flora City Parking Lot was erected in 1972 as a part of the Flora Centennial program.
Old Flora Cemetery, 1830-1926 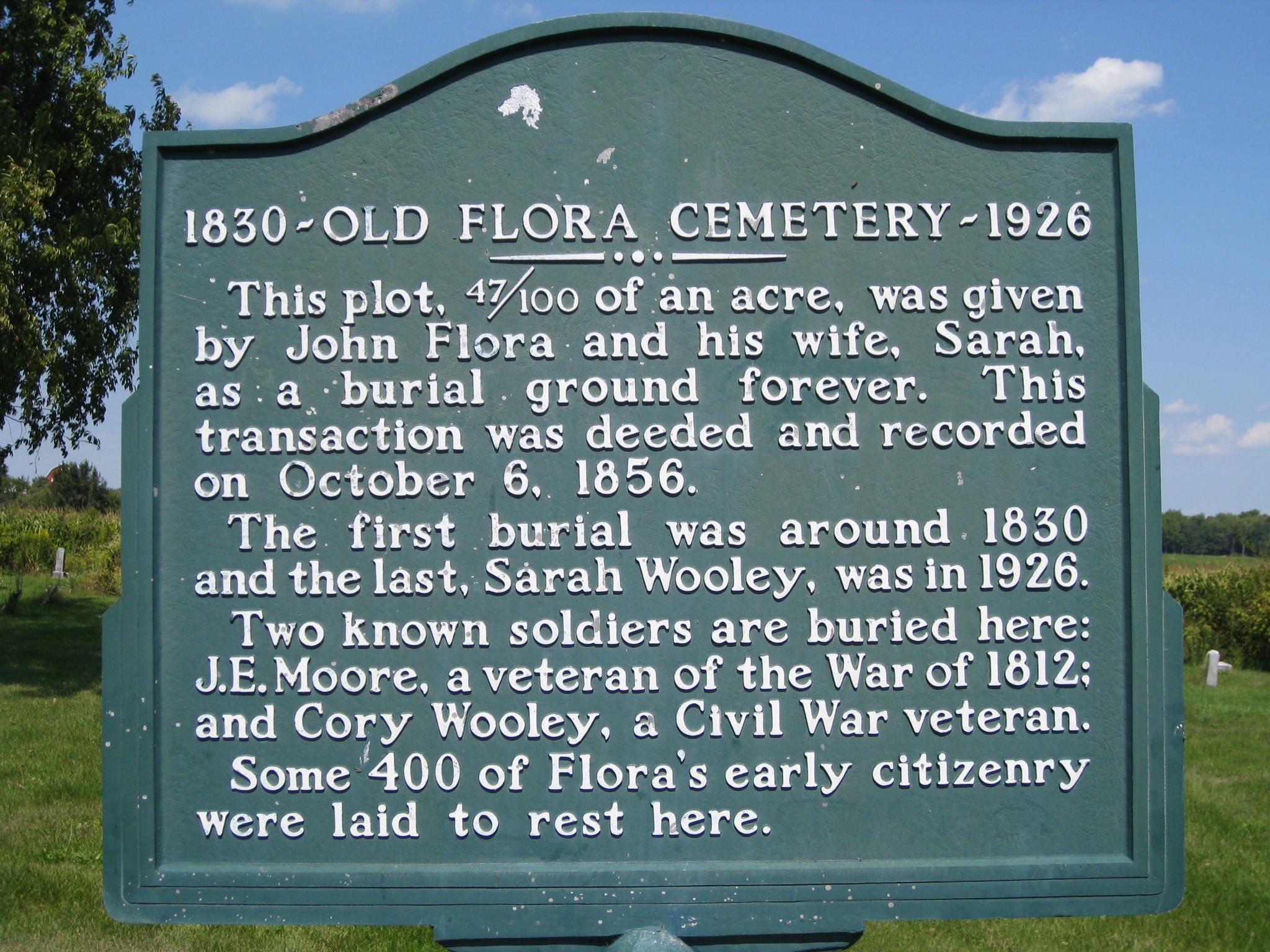 This plot, 17/100 of an acre, was given by John Flora and his wife, Sarah, as a burial ground forever. This transaction was deeded and recorded on October 6, 1856. The first burial was around 1830 and teh last, Sarah Wooley, was in 1926. Two known soldiers are buried here: J.E. Moore, a veteran of the War of 1812; and Cory Wooley, a Civil War veteran. Some 400 of Flora's early citizenry were laid to rest here.
The Old Flora Cemetery and this marker are about .3 mile north of the old Flora school building, off a gravel road to the west.
Milroy Family
The Milroy Family 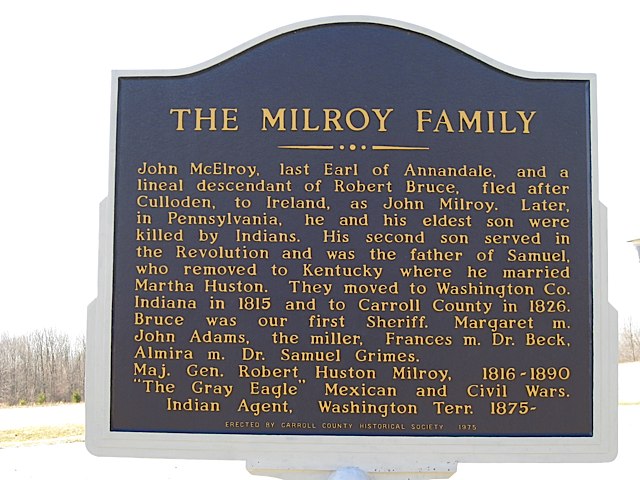 John McElroy, last Earl of Annandale, and a lineal descendant of Robert Bruce, fled after Cullodan, to Ireland, as John Milroy. Later in Pennsylvania, he and his eldest son were killed by Indians. His second son served in the Revolution and was the father of Samuel, who removed to Kentucky where he married Martha Huston. They moved to Washington Co., Indiana in 1815 and to Carroll County in 1826. Bruce was our 1st Sheriff. Margaret m. John Adams, the miller. Frances m. Dr. Beck, Elmira m. Dr. Samuel Grimes.
Maj. Gen. Robert Huston Milroy 1816-1890. “The Gray Eagle” Mexican & Civil Wars. Indian Agent, Washington Terr. 1875.
Gen. Samuel Milroy 1780-1845 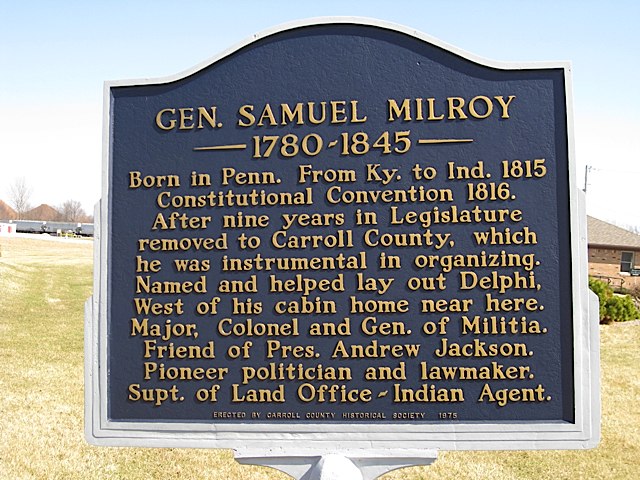 Born in Penn. From Ky. to Ind. 1815. Constitutional Convention 1816. After nine years in Legislature removed to Carroll County, which he was instrumental in organizing. Named and helped lay out Delphi, West of his cabin home near here. Major, Colonel & Gen. of Militia. Friend of Pres. Andrew Jackson. Pioneer politician and lawmaker. Supt. of Land Office-Indian Agent.
This two-sided sign was erected east of Delphi near County Road 300N in 1975, giving a brief history of Gen. Samuel Milroy and the Milroy family.
Samuel Milroy – Child of the American Revolution 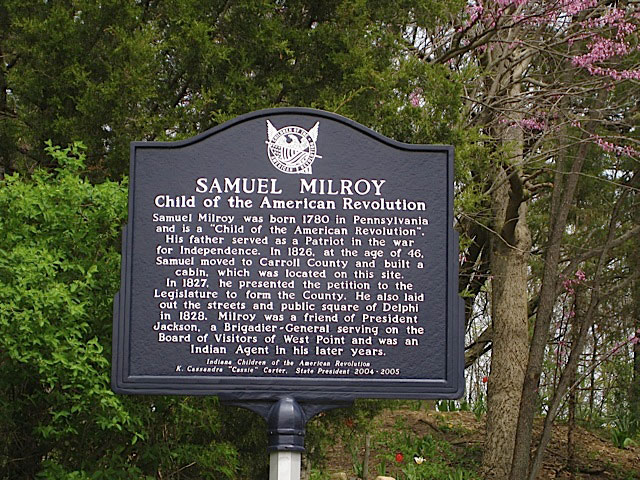 Samuel Milroy was born 1780 in Pennsylvania and is a "Child of the American Revolution." His father served as a Patriot in the war for Independence. In 1826, at the age of 46, Samuel moved to Carroll County and built a cabin, which was located on this site. In 1827, he presented the petition to the Legislature to form the County. He also laid out the streets and public square of Delphi in 1828. Milroy was a friend of President Jackson, a Brigadier-General serving on the Board of Visitors of West Point and was an Indian Agent in his later years. 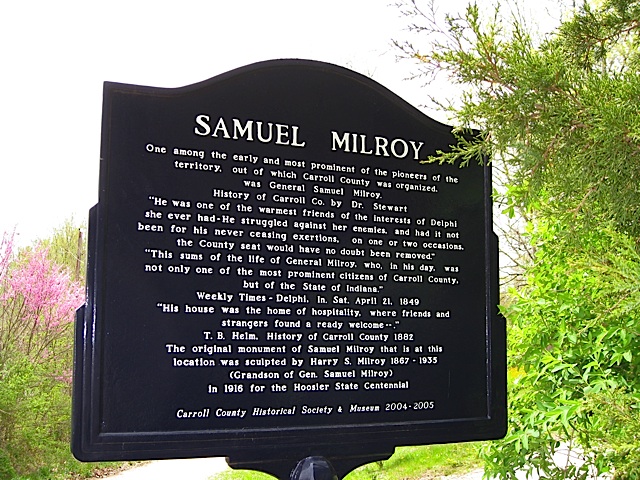 One among the early and most prominent of the pioneers of the territory, out of which Carroll County was organized, was General Samuel Milroy. (History of Carroll Co. by Dr. Stewart)
"He was one fo the warmest friends of the interests of Delphi she ever had. He struggled against her enemies, and had it not been for his never ceasing exertions, on one or two occasions, the County seat would have no doubt been removed."
"This sums up the life of General Milroy, who, in his day, was not only one of the most prominent citizens of Carroll County but of the State of Indiana.": (Weekly Times - Delphi, In., Sat. April 21, 1849.)
"His house was the home of hospitality, where friends and strangers found a ready welcome." (T.B. Helm, HIstory of Carroll County 1882.)
The original monument of Samuel Milroy that is at this location was scupted by Harry S. Milroy 1867-1935 (Grandson of Gen. Samuel Milroy) in 1916 for the Hoosier State Centennial.
Back side of above marker, Carroll County Historical Society & Museum 2004-2005. The sign is located off Old Camden Road in the eastern part of Delphi, adjacent to the stone monument marking the Milroy Cabin and on one of Delphi's Historic Trails. 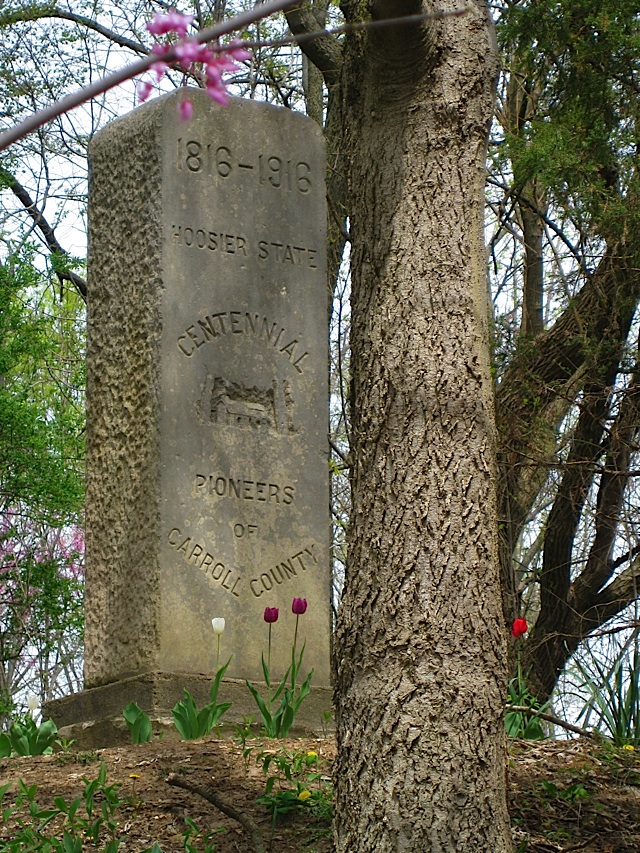 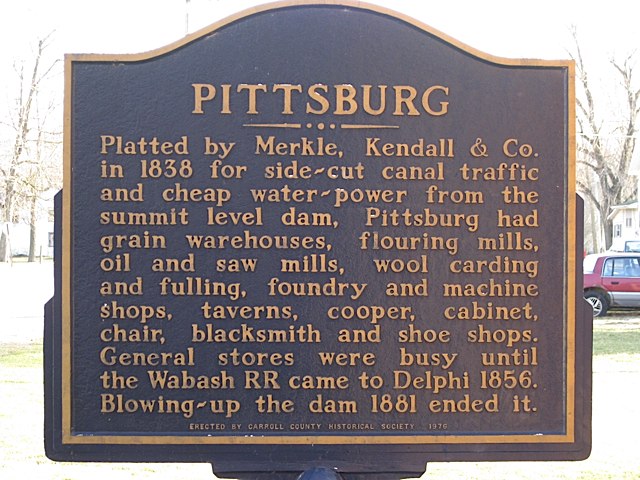 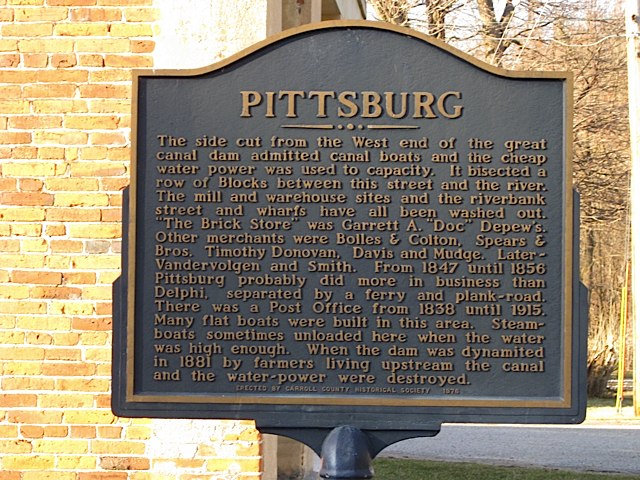 The side cut from the West end of the great canal dam admitted canal boats and the cheap water power was used to capacity. It bisected a row of Blocks between this street and the river. The mill and warehouse sites and the riverbank street and wharfs have all been washed out. “The Brick Store” was Garrett A. “Doc” Depew’s. Other merchants were Bolles & Colton, Spears and Bros., Timothy Donovan, Davis and Mudge. Later—Vandervolgen and Smith. From 1847 until 1856 Pittsburg probably did more in business than Delphi, separated by a ferry and plank-road. There was a Post Office from 1838 until 1915. Many flat boats were built in this area. Steamboats sometimes unloaded here when the water was high enough. When the dam was dynamited in 1881 by farmers living upstream the canal and the water-power were destroyed.
The two-sided Pittsburg sign was erected in 1976 and stands near the old brick store building in Pittsburg.
Pyrmont
Pyrmont 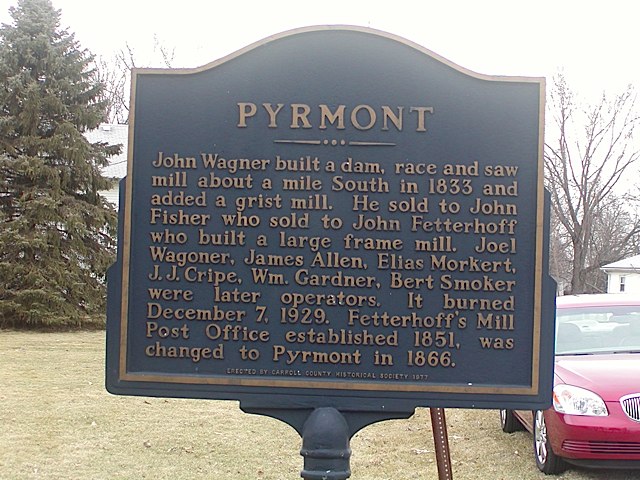 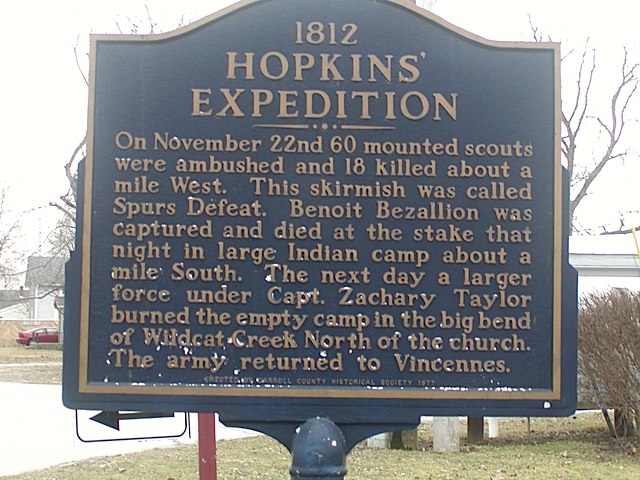 On November 22nd 60 mounted scouts were ambushed and 18 killed about a mile west. This skirmish was called Spurs Defeat. Benoit Bezallion was captured and died at the stake that night in large Indian camp about a mile south. The next day a larger force under Capt. Zachary Taylor burned the empty camp in the big bend of Wildcat Creek north of the church. The army returned to Vincennes.
The dual Pyrmont and Hopkins Expedition sign was erected by the Carroll County Historical Society at the four-way stop in the town of Pyrmont, Clay Township, in 1977.
Sycamore Row
Sycamore Row 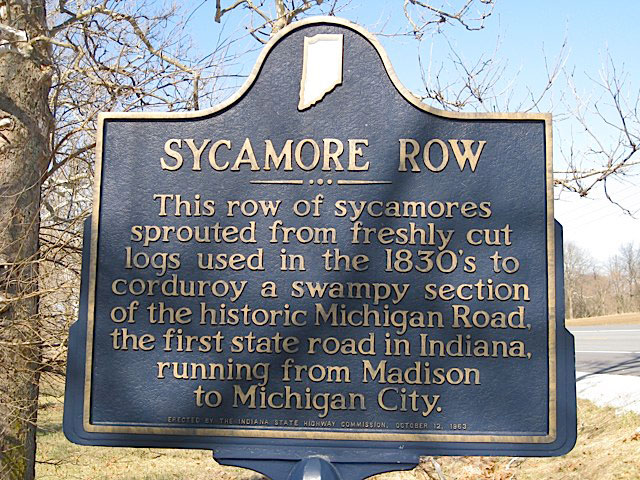 This row of sycamores sprouted from freshly cut logs used in the 1830's to corduroy a swampy section of the historic Michigan Road, the first state road in Indiana, running from Madison to Michigan City.
Erected by the Indiana State Highway Commission, October 12, 1963. It is located south of Deer Creek, Washington Township, Carroll at the site of the Sycamores, just south of the bridge over Deer Creek on State Road 29, the Michigan Road.
Whistler Cemetery
Whistler Cemetery 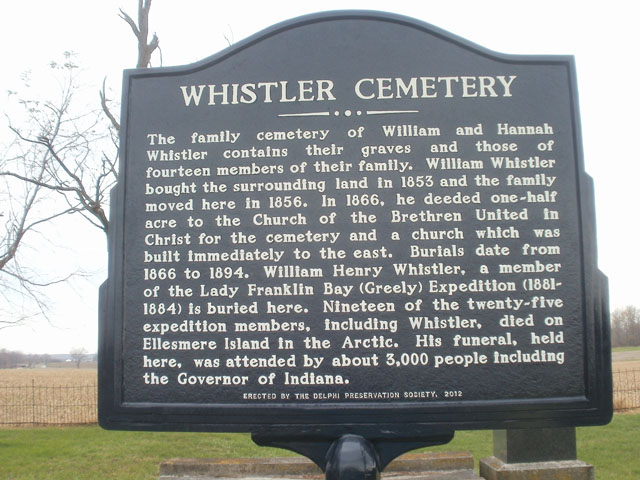 The family cemetery of William and Hannah Whistler contains their graves and those of fourteen members of their family. William Whistler bought the surrounding land in 1853 and the family moved here in 1856. In 1866, he deeded one-half acre to the Church of the Brethren United in Christ for the cemetery and a church which was built immediately to the east. Burials date from 1866 to 1894. William Henry Whistler, a member of the Lady Franklin Bay (Greely) Expedition (1881-1884) is buried here. Nineteen of the twenty-five expedition members, including Whistler, died on Ellesmere Island in the Arctic. His funeral, held here, was attended by about 3,000 people including the Governor of Indiana.
Whistler Cemetery Burials 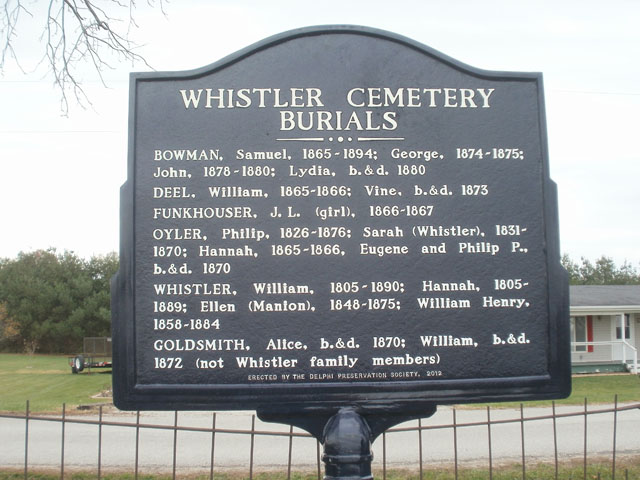