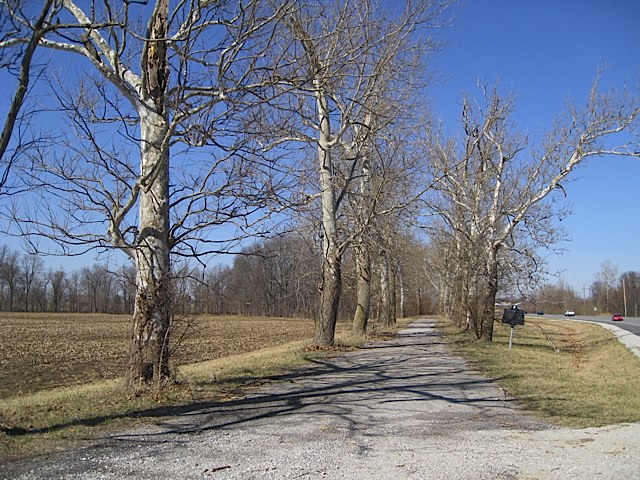 Just south of the village of Deer Creek in northeastern Carroll County is an avenue of sycamore trees to which are attached several interesting stories. When Dora Thomas Mayhill wrote her Carroll County, Indiana, Postal History… in 1954, there were 36 trees on one side of the road and 56 on the other. Old residents of the community remembered they were good-sized saplings in 1868.


The most popular story is that the trees sprouted from sycamore logs used to make a corduroy base for the plank road laid there in 1850. Gravel and dirt had been used to make a fill, and the sycamore logs were laid on top. Several alternate theories and traditions are described in a recent article which also provides more history of the immediate area.


The Michigan Road was known as the Great Thorofare between Madison and Michigan City—the first state road in Indiana. The road was first improved in 1830, scrip being used to pay the workers. In 1837 it was turned over to the counties through which it passed for maintenance. Supervisors were empowered to call out farmers along the road, each liable for two days work each year. Bridges across the streams were mostly of logs and were washed away each year. It was considered a “poor” road, never being satisfactory.


In 1850 the road was planked to improve it. The roadbed was graded level, then a wooden superstructure was built of log sills or sleepers, laid lengthwise along the outer edges, and to these were nailed, with spikes, planks two or three inches thick and perhaps ten feet in length. These were placed together as tightly as possible, thus creating a road free of dust and mud as long as the planks were in good repair. However, mud puddles formed under the planks, so that as one traveled along, as the planks became worn, they rose and fell under the weight of the vehicle, and mud spurted up through the crevices, spattering over everything. Some places were practically impassible during the muddy season, which might be at least four months of each year.


Because the plank roads were expensive to build and maintain, it was necessary for them to be toll roads, also called pikes. There was a toll booth at the south edge of what is now called Deer Creek but was originally platted as West Sonora and known by that name for many years.

The Michigan Road was not paved until 1929. Older folks in the community remember traveling all the way to Indianapolis from Deer Creek on the unpaved road. In 1940 when the road became State Road 29, the State intended to cut down the trees, but a large number of signatures were acquired for a petition which ultimately preserved the trees.


In the 1980s, a new bridge was built over the creek at the site of the historic sycamores. At that time, a new stretch of highway was built to bypass the dangerous sycamores. Many accidents had occurred in the sycamores over the years.


The historic marker erected by the State Highway Department in 1963 marks the site of the remaining historic sycamores just west of State Road 29. Twenty-six stately old trees stand on one side and 32 on the other side.


Sycamore Row is a major landmark on the hisoric Michigan Road and one of the sites pointed out in the application for Historic Byway status which has been granted by INDOT.
Copyright © Carroll County, Indiana | Developed by Scared Rabbit
What can we help you find?